The sporty version of the V7 range celebrates 10 years by taking on an even grittier look thanks to a new top fairing and full LED light colours.

From the fuel tank to the racing number plates, the V7 III Racer 10th Anniversary has numerous features reminiscent of the previous versions of the unmistakable Café Racer from Mandello.

Moto Guzzi V7 Racer has always been the ambassador of the V7 range with the sportiest spirit. Born in 2010, evolved in 2015 with the arrival of the V7 II Racer and in 2017 with the birth of the third generation, in 2020 the Moto Guzzi V7 III Racer reinvents its self once again, in accordance with tradition in celebration of its tenth anniversary.

The new Moto Guzzi V7 III Racer 10th Anniversary differs clearly from the previous version in the front view, where a new top fairing with incorporated windscreen stands out, sleek and sporty, following the dictates of the most authentic Café Racer style. The top fairing is enhanced by a special red dedicated graphic - also picked up on the saddle cover hump - which flaunts the “10th Anniversary” celebratory detail.

At the centre of the top fairing is the new, full LED headlight, just as the taillight and turn indicators are also LED. A modern and dynamic look also emphasised by a thinner and sleeker rear mudguard, and by brand new “bar end” rear view mirrors.

There are numerous stylistic features reminiscent of the previous versions of the Café Racer from Mandello, all tributes to its ten-year heritage: the fuel tank, wrapped on the top by the classic leather strap, it returns to the beautiful glossy chrome that characterised the original 2010 model, whereas other distinctive V7 Racer and V7 II Racer traits reappear on the side racing number plates, namely the number 7 and the red edge with the detail of the Italian flag.

As for the rest, Moto Guzzi V7 III Racer 10th Anniversary maintains unaltered the fundamental characteristics of a model that has by now become iconic, such as the frame and the swingarm painted in colour “Rosso Corsa” (Racing Red), an explicit reference to the 1971 V7 Sport, nicknamed, in fact, “telaio rosso” (red frame); the semi-handlebars, the splendid, humped saddle, now enhanced with red stitching, that has a single-seat look but is approved for two-up riding as well: in fact, it has pillion foot pegs, whereas the seat cover can be easily removed when necessary. The spoked wheel rims have black channels and red Moto Guzzi stickers like the other sport models from the Eagle Brand, including the Audace muscle bike.

Produced as always in a numbered edition, as indicated by the plate located on the upper steering yoke, V7 III Racer 10th Anniversary is not only the sportiest of the range, but also the one with the most prestigious parts, that once again demonstrate Moto Guzzi's ability to create true custom models. These include the set-back footpegs machined from solid billet, the lightened steering stem and the steering yoke guard. Anodized black aluminium is also used widely throughout this bike. This hand-crafted treatment, which requires superb artisan skill, characterises the side fairings and the throttle body guards.

The V7 III Racer 10th Anniversary, like the new Moto Guzzi V7 III Stone S, is also shown with new Dunlop Arrowmax Streetsmart tyres, higher performance, so you can fully enjoy the dynamic qualities of the Café Racer from Mandello. 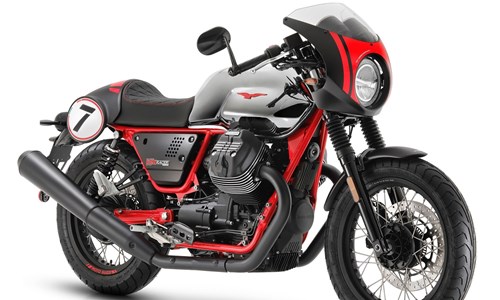